Franklin and the Four Seasons

Mostly green and has a large shell colored yellow and brown, brown eyes with black pupils

Franklin Turtle is the protagonist. He is the oldest son of Mr. and Mrs. Turtle and the 7 year old big brother of Harriet Turtle. He is the best friend of Bear, and the owner and caretaker of his fish, Goldie. He is voiced by Noah Reid, and later Cole Caplan.

Franklin is an imaginative and friendly turtle. He can count by twos and tie his shoes (Hey! That rhymes!). He loves his family and friends very much and enjoys going to school and learning new things. He's best friends with Bear who he enjoys playing with and spends most of his time with. He's also very close with his friend Snail who looks up to him like a big brother. Franklin's curiosity can sometimes get him in trouble, but he always makes it right in the end.

﻿Franklin is mostly green. He has a large shell colored yellow and brown. His eyes are brown with black pupils. He wears a red baseball cap and red neckerchief. He is 4 feet tall.

Franklin tends to be very kind, and he has a large circle of friends, but also tends to keep things to himself at times. Franklin's friends and his parents generally help to bring out the best in him, and he's also now a big brother (a desire he had expressed multiple times in the past). He takes good care of his pet goldfish, Goldie, and also has a stuffed dog named Sam who, despite growing older, he still hangs onto and communicates with. Franklin enjoys math. Unlike his other friends, he's the only one that's not named for the animal that he represents, he would originally be called "Turtle", although it is used in his surname (known to be his last name). 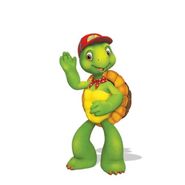 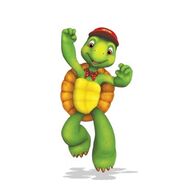 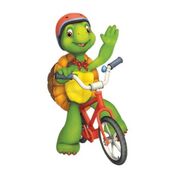 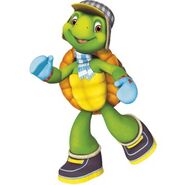 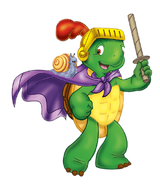 Add a photo to this gallery
Retrieved from "https://franklin.fandom.com/wiki/Franklin_Turtle?oldid=7560"
Community content is available under CC-BY-SA unless otherwise noted.