Goose (full name possibly Goose Gooose) is a Canadian goose that is friends with Franklin. She is the best diver among Franklin's friends. She is shy and outgoing but easily startled.

Franklin learns a bit more about Goose and her family when he attends her family's migration party. She is scared of cellars just like Franklin. Goose tends to like jewelry and has been seen wearing or holding diamonds or gold in several episodes. Goose has a little brother who wears glasses, a character that has only appeared once in the series to date. She is one of the few residents in Woodland to have parents that are not siblings and have different families, like Franklin, Bear, Beaver and Rabbit. 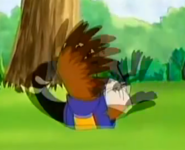 Our His Friends Got Into Lot Of Trouble

Add a photo to this gallery
Retrieved from "https://franklin.fandom.com/wiki/Goose?oldid=6266"
Community content is available under CC-BY-SA unless otherwise noted.